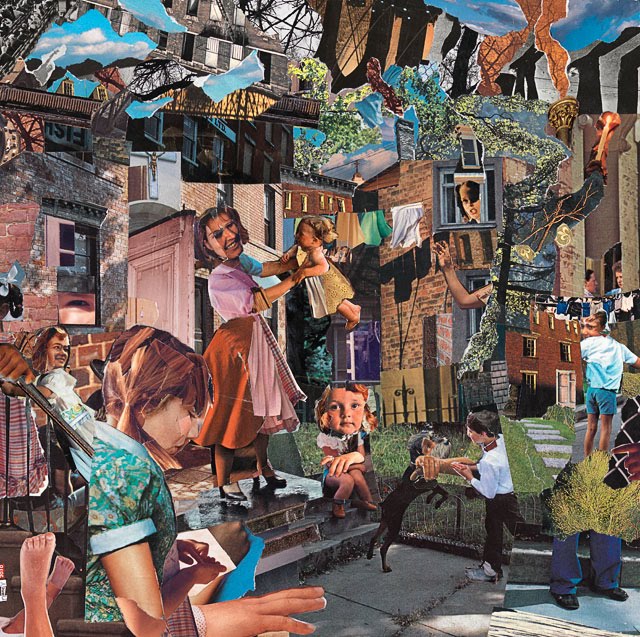 "Counting", collage on board, 2010. The first image in the "Murphys in Griffintown" series. 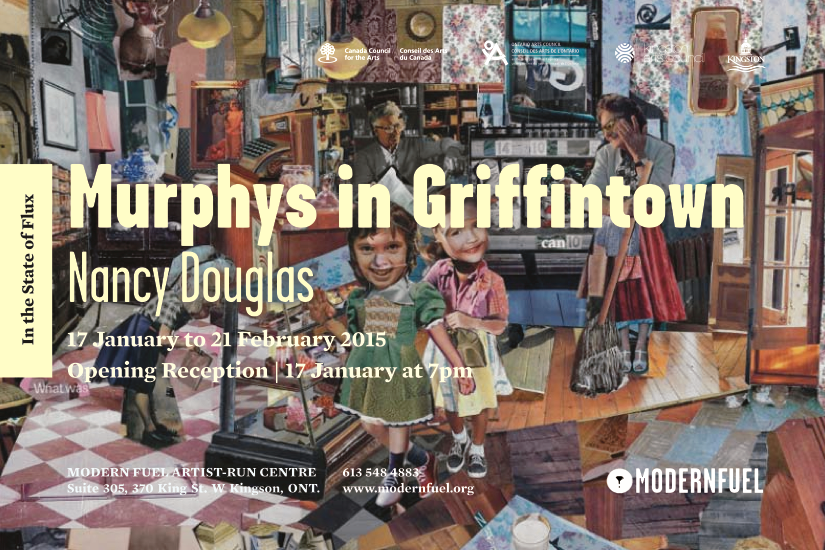 Opening for Murphys in Griffintown is tonight at 7! The Modern Fuel, in the Tett Centre,Kingston.
The exhibition has evolved to something more wonderful than I had imagined. Thanks to the Modern Fuel and Ontario Arts Council for making the Kingston exhibition possible.
I will update here with photos of the exhibit, plans for the future, and details re sale of prints of the originals.
Ciao for now.

My Head is Spinning

So much has happened. I can't believe I haven't posted anything about it:

So now, as summer is before me I am planning my venues and the reproduction of the work and soon the making of a video! How great is that?

The collage "Sleep Tight" was monumental for me, as I needed it to say so much. Recently, I sold a Giclee print of it, and when the print came back from the framers, the invoice said KIDS IN BEDS.  That is really the core of the image I guess!

It is the memory of Frances who sits in the top bunk, planning what to do if someone should break in through the window in the middle of the night.  Her lifeline is the string she fastens to her brother Peter's toe.  Her plan is to pull the string and wake him up for protection.

The challenge for me was to see the collage as painting, and to depict the correct time of evening when the sun goes down and the streetlights come on.  The perspective had to be correct, but not overtly so. I wanted the viewer to feel as though they were at the door to the room, looking in, and Frances looking back.  She is the only one in the image who senses the viewer.

Work on "Murphys in Griffintown" is still going strong!  I've completed the fifth piece..."Sleep Tight", a childhood memory of Frances Murphy.  It is a very painterly collage. Very happy with it.  It's been shot professionally (by Derek Cooper) so will upload it here soon.

The works are taking longer than I thought, as each one requires quite a bit of research.  I love research and seeing where it takes me.  The next work will include Brother Norbert once of St. Ann's Parish.  I will place him on the sidewalk, near the corner of Ottawa and McCord.  I can see the top of St. Ann's looming in the sky behind him.  It is the memory of Edward Murphy.

Research is also ongoing for the production of the exhibition.  I am finding it difficult to imagine the work projected on a condo building(perhaps) or a historic building in Griffintown.  I'd like it outside but inside too. The neighbourhood is changing so much!  I can't keep up.

Last month I was pleased to have Sharon Doyle visit my Kingston studio.  Coincidentally, my mother was visiting that day as well.  Sharon is younger than my mother, so it was my mother's younger siblings that Sharon went to school with.  Two St. Ann's Girls School alumni meeting with my work in the background!  I was too excited to take a picture. It meant a great deal to have them meet and to have Sharon see the work thus far.  She was integral to the development of the idea of the exhibition!  I sensed her wealth of knowledge of the Griffintown area as we spoke.


Check out  her intriguing book:
"An Irish Heart" How a Small Immigrant Community Shaped Canada
by Sharon Doyle Driedger.
It's on my Christmas list!

Finally! Here is the finished "Gramma Guys"!  I started working on the next piece so quickly I forgot to upload a photo of GG.  I am so happy with how this piece turned out!  It is my favourite-of all the work I have ever done.  I believe it's the layers of patterns and the layered story behind it.
I found out today it's been selected for the Kingston Art Council's Juried Art Salon.  Very stiff competition with so many talented artists in town, so I was very pleased.
I've been pondering where in Kingston I should exhibit?  Projected images are a tricky thing I think.  I'm welcoming the opportunity to learn a new media.  I've not projected my images before.  The work is being shot by Kingston photographer Derek Cooper-Reproducing Art.  That allows me to project large-8feet without losing resolution.
This weekend is the Spring Kingston Art Tour-my studio Nelson Street Studio is participating.  Come by and take a look if you're local!

Working on these collages for Murphys in Griffintown is a lot like bobbing for apples.  Each day I dunk my head into a bucket of cold fresh water searching for the prize.  Everything around me is forgotten, the apple awaits!  I know if I stick my head in I'll get something.

"Gramma Guy's" is no ordinary apple.  It has been a struggle to the unknown.  Challenging.  Rewarding.  It is in some ways the best work I have ever done.  Scary to think that.

I finished it today!

I got a crisp Fuji apple.  My favourite!

I'm deeply submerged in my current collage-"Gramma Guy's".  It is centered around Kathleen Murphy's sweetest childhood memory-the corner store, which sold penny candy.  She was close friends with Lise Guy whose grandmother owned the store at the corner of Ottawa and Eleanor Streets.  It was only a half block from where the Murphys lived, so they went often.  They would say "Let's go to Gramma Guys" and that would mean the shop on the corner.  She remembers two ladies, one fifty to sixty years of age, and the other an indescribable age...REALLY old.  Both ladies were very happy to see young Lise and Kathleen and no doubt gave great quantities of candy.

Because I love researching family history, I knew I couldn't depict the interior of the shop without knowing who they were.  I needed to research the family, the place.  I knew that the Murphys moved to Griffintown in 1948 so the store existed that year.   The most recent published Canadian Census is 1911 and it does have a number of Guy families.  But I wanted to find the family in the 1940's or 50's at the store.  I was thrilled to find a 1950 insurance map of the area at the Quebec National Archives website.  It is an amazing site with a wealth of information. 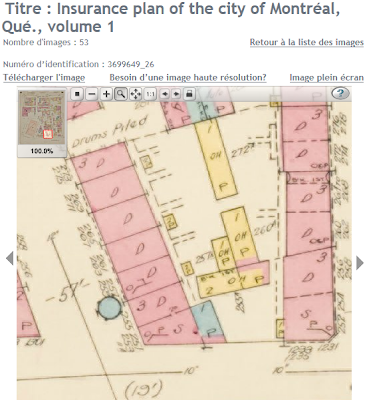 The image above shows the buildings surrounded by McCord, Ottawa and Eleanor Streets.  On the bottom right, the pink square ("SP") is 1231 Ottawa Street (at Eleanor).  I noticed it has the corner of the building lobbed off which made me think it must have been a store at one time.  You can see 265 McCord Street is on the left, with a "D" on it for Dwelling.  Insurance maps are great, because by studying them you can imagine the visual.  You can see where fire hydrants were!  It also reveals what materials the buildings were made from and for what purpose they were built.  The row houses on McCord were brick but some of the sheds behind were tin.

Also on the Quebec Archive site is year after year of Lovell's Directory.  I gasped out loud when I saw what they had.  For the years 1842 thru 1999, one can search Montrealers by name or address.  I looked for 1231 Ottawa Street in the year 1950.  Guess who lived there?  Mrs. Claire Guy (widow of Arm).  I figured that was short for Armand. 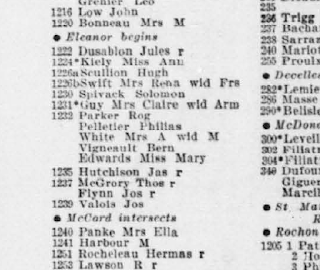 I now had two first names to run with!  Was Claire Gramma?  or was she Lise's Mother?  I knew it would be easier to find Armand Guy than it had been to find my ancestor John Murphy (one of my previous researching endeavours).

I consulted my favourite...Ancestry.com.  It has the Drouin Collection of Roman Catholic births, deaths and marriages.  These are the "notebooks" of parish priests.  I knew the Guy family was Catholic, or Kathleen wouldn't have befriended her at St. Ann's school!  Within minutes I had  a record before me.  I deciphered the handwriting and the French to figure it was definitely the correct Lise Guy.  She was born in the same year as Kathleen, and in the area.  I found the names of her parents, and because her father's name was so unique Onesime Louis Armand Charles Guy, I was then able to trace his parents.  It was his mother who was named Clairina St. Onge (Claire in the directory).  She was the Gramma.

In only two hours I had uncovered so much.  I felt that I knew enough about them to start "fleshing out" the collage.  I decided to put Armand, the grandfather in the setting as well.  The 1911 Census gave me an occupation for him- a "peinture" (painter) working for a "decorateur".  How fascinating!  I am used to searching for people who are listed as "labourers".  I placed the grandfather Armand in the back of the shop seated, reading the paper.  The store has many colours and a number of different wall papers.

But, who was the REALLY old little lady behind the candy counter?  (She was very small and apparently did not need to bend over to get the candy from the lower shelves.)   I found Armand Guy, born 1888 (Claire's husband) and his family in the 1901 Census.  Armand's father is Onesime Guy married to Delina.  They were both born in 1850.  Onesime died in 1931 at the age of 82.  I haven't yet found any death information on Delina.  Is it possible that in 1950, Delina was the lady behind the counter and she was one hundred years old?

I also found Onesime's father Michel(1871 Census).  He was born in 1820 and in the Lovell's Directory it is interesting that he is a carpenter.  This is for me the "bag of candy".  You see,  Michel Guy was a carpenter, father of Onesime Guy who was a joiner(cabinet maker) and father of Armand Guy who was a painter/decorator.  It is such a pattern.

I feel I can now safely extrapolate.  I also found some great photo reference from a number of sites-stores from the 1930's to 1950's.  The collage by the way is almost complete.  I have an arm, two feet and a shelf yet to go.  The image has grown before my eyes filled with a recurring checkerboard and other enigmatic devices.